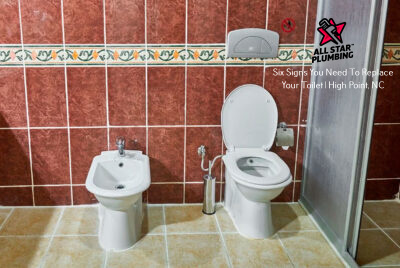 Six Signs You Need To Replace Your Toilet

When the toilet is defective, always opt to get it replaced. There’s no going around this suggestion.  A toilet that’s not working properly anymore will make the comfort room a hell on this earth.

If it clogs, anyone coming in will see the disgusting unflushed wastes. It is also possible for disgusting liquid to seep out of the spot where the toilet is installed. A toilet can show a lot of problems, some reversible and some that are not. That’s why it’s a headbanger for homeowners when they replace the toilets in their houses.

This article will discuss the 6 definite signs that tell you to need to replace your toilet. But before that let’s answer this important question…

What Happens When A Toilet Is Being Replaced?

A toilet replacement is an overhaul of your house’s entire toilet system. This means that the installers will have to dismantle a portion of the bathroom where the toilet is installed.

Even so, the installers will do their best to keep the work clean and orderly. With that being said, they will try to make the replacement job flawless by making sure that the surrounding objects don’t loosen, crack, or get scratched while the work is ongoing.

Here Are 6 Indications That You Need To Replace Your Toilet

Your Toilet Is Really Old

A toilet doesn’t last forever. Just like your beloved car, it will one day get old and display complications that force you to get a replacement.

Fifty years is the average lifespan of a toilet. However, in most cases, it doesn’t get to work for such a long period. Factors such as material for building, installation, environmental conditions, and method of use might require you to replace the toilet sooner.

Some toilets last for more than 50 years. However, their functionality isn’t that great anymore. Common issues that they display are clogging, slow flushing, odor, molds, and leaking.

You should consider replacing your toilet every 25 years, even if it’s still working well. Twenty-five years is the most common length of time before a toilet starts to demand replacement for its parts.

If the toilet requires a frequent part replacement, it’s better to get it replaced than continue fixing it. Fixing a toilet continuously will build up costs that will eventually equal the price of a new toilet in the market.

But how frequently should parts replacement be considered a replacement? Say if the toilet acts up again after you’ve replaced one of its parts in the last 2 months, that’s when you have to ponder about getting a new one.

Toilet Brings Out Foul Smells All The Time

Dirt can accumulate on the inner workings of the toilet. For a toilet that’s been used for a long time, this dirt can be a source of a strange odorous smell that doesn’t go away no matter how much you clean the toilet’s tank.

A method to relieve yourself from the smell is to get the toilet removed then clean it thoroughly. But why settle for less? Instead of going through with all the hassle, just get a new toilet instead. Doing so will be easier and will be cleaner.

Understand that once a toilet smells, it might continue to be that way. So getting a newer toilet might work best even though it’s not the cheapest option.

Several Cracks Around The Toilet

A toilet that has developed cracks on any of its parts will have to be replaced. Of course, you can remedy the existence of the cracks by putting epoxy over them. However, epoxy only manages to delay the unthinkable.

By the way, the toilet can get cracks due to several reasons. The first is that debris might have accumulated on the channel going to the floor seal. When this happens, a crack on the bowl or the toilet’s base might appear.

Strong water pressure can cause cracks too.  A crack that’s caused by this normally appears on the toilet’s tank and other nearby parts.

Then there’s also the crack that the sheer weight of the user causes. If the toilet can’t bear your weight, the crack will develop on its bases and the edges of its bowl. In connection, before proceeding to purchase a toilet, always take a look at its weight profile and design.

Did the toilet get clogged while you were using it? If so, how many times did this happen? Once, twice, or even thrice?

If the toilet clogs periodically, opt to get it replaced. It might be that there’s an underlying cause that leads to clogging from time to time.

Understand that the continuous use of a toilet that suffers from periodic clogging can lead to uncomfortable situations. It might clog on your visitors, spread unwanted odors on your house, and leave sprays of dirty water on the bathroom floor.

By saying that the toilet dances, we mean that it’s wobbly. Have you tried being on a wobbly toilet before? Pray that you won’t ever be. A clogged toilet will make defecating very awkward. Just imagine keeping your balance while trying to get the dump out of your system, it’s not easy.

Haphazard installation is the primary cause of a wobbly toilet. If this isn’t what’s causing this, it might be that its grip on the flooring has started to loosen.

All Star Plumbing is locally owned and operated by Josh and Larry Davis. Their efforts not only bring remedy to the many needing plumbing solutions, they consistently support causes that strengthen our communities. Josh and Larry are determined to provide the very best talent and experience in the field. You can feel the care, love and rely on All Star Plumbing High Point NC when you call.

© 2022 All Star Plumbing. All rights reserved. Website by Spotlight Revenue